There are many types of computers.

When we talk  about computers we tend to think of a personal computer such as a desktop or laptop computer. But computers can come in many shapes and sizes, and they perform many different functions in our daily lives. When you withdraw cash from an ATM, scan groceries at the shops, or use a calculator, even smart phones are all  types of computer.

Most of us use desktop computers at work, home, school, or the library. They can be small, medium, or large in style, and usually sit on a desk. Once you add a monitor, a keyboard and a  mouse, you have what is generally known as a desktop computer.

All-in-one desktop computers have a built-in monitor to save space..

An other type of computer that you would have heard about is a laptop computer, or laptops or net-books as they are often referred to. Laptops are battery or mains-powered personal computers that are more portable computers, so you can take them almost anywhere.

With a laptop type computer, it is more difficult to upgrade  and a lot of the parts are integrated on the same circuit board. This means you cannot modifi them as much as a desktop. But in most cases  it is possible to add more RAM or a bigger hard drive.

A laptop computer is sometimes called a notebook computer because of its size although a lot of net book computers do not have a DVD drive . 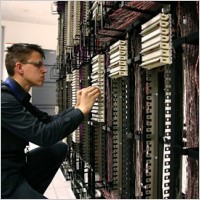 A server is a large computer or group of interconnected computers that "serves up" information to other computers on a network. Most large businesses use file servers that their employees can access to store and share files. A server can look like a regular desktop computer, or it can be much larger and fill a complete room or large building.

Servers also serve play a huge role in making  the Internet work.Servers are where web pages are stored. When you click on a link, a web server delivers the page you requested.

Other Types of Computers

Other Types of Computers

There is lots of everyday equipment that are basically specialised computers, even though we don't always think of them as computers. Here are some examples:

The iPad, is a type of tablet computer

Personal computers come in two main "styles": PC and Mac. Both styles are fully functional, but they do have a different look and feel, and many people prefer one or the other.

Although PC can refer to an IBM PC Compatible, the term can also be used to refer to any personal computer, including Macs.